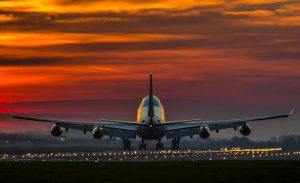 During FITUR, the annual Spanish global Tourism Fair, Professor Geoffrey Lipman said that the focal aviation decarbonization pledge – for 50% of 2005 levels – was now more than a decade old and no longer in the mainstream of Climate Resilience thinking.

Introduced at the Copenhagen COP in 2009 as part of IATA’s 4 Pillar strategy, it has been left behind by the Paris Agreement and the UNFCCC Carbon Neutral 2050 drive.

The core underpinning that envisages an adequate supply of safe, sustainable fuel, focused on biofuels, also deserves challenging – with fossil fuel companies coming to the game with not only too little, too late, but also too deficient in terms of full life-cycle. It’s time for them to up their game and create an ambitious pathway for 100% synthetic aviation fuel well in advance of 2050 – starting now.

“This is crazy” Lipman said “Given air transport’s dominant global socio-economic contribution, with unique support for island and landlocked countries – particularly developing states. It cannot be that aviation is looking at an ultra-conservative 2050 ambition pathway – when the rest of the world is looking to net zero carbon.

Lipman added “We need a moon-shot approach – like the intense decade long collaboration activated by President Kennedy, to put Neil Armstrong on the lunar surface. We can build on the sector’s relatively modest CORSIA initiative but integrating a Climate Neutral 2050 target. It also needs the fossil fuel companies to radically increase their commitment to this sector and massively increase the money allocated to R&D in this area.”

Noting that major airlines like Etihad; EasyJet and IAG; as well as the world’s airports had declared their Climate Neutral 2050 goal and the EU is advocating its Green New Deal priority encompassing aviation: Lipman said “it’s time for the rest of the sector to follow suit and for the aviation community to embrace the moon-shot drive.”
Geoffrey Lipman is President of SUNx Malta – committed to Climate Friendly Travel.

About Universal Network SUNx
The Strong Universal Network SUNx is a program of the EU-based, not for profit Green Growth and Travelism Institute, and a legacy to the late Maurice Strong – Sustainable Development Pioneer. Its goal is to promote Climate Friendly Travel with good & bad effects measured and managed coherently: with Green Growth at the core and, 2050-proof in line with the Paris Accords, and the W.E.F. 4th Industrial Revolution.

And the Winner of the Climate smART Award 2020 is…