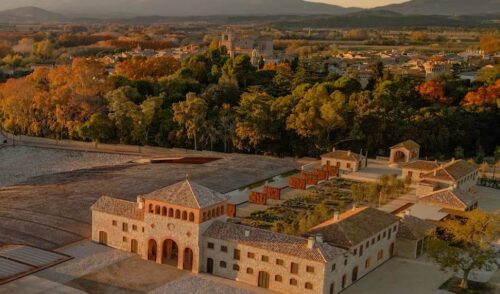 Perelada, Girona, Spain, June 1, 2022 / TRAVELINDEX / A year away from its 100th anniversary, the historic brand is celebrating the culmination of the winemaking, scenic and cultural legacy of a family with deep roots in the region. Perelada unveils its new winery, a commitment to winemaking excellence in Empordà.

• Discover the World’s Best Vineyards and Wineries at TOP25Vineyards.com.

Wine has been made at the Castillo Perelada since the Middle Ages, as shown in several documents and parchments from the period to be found in the library. When Miguel Mateu bought this ensemble of monuments in 1923, one of his primary objectives was to revitalize the wine producing tradition, a tradition that is more alive than ever these days and which has incorporated the most modern technology to create wines that make full use of the nuances of the soils and vines of the Empordà.

The singular multidimensionality of the new Perelada winery in terms of winemaking, design, sustainability and wine tourism meets the region’s winemaking tradition and roots, putting Empordà on the international wine map.

Building the winery fulfils the dream of three generations of the owners of Perelada, the Suqué Mateu family, who are committed to producing outstanding wines and showcasing the vineyards of the property’s various estates along with the tremendous wine-growing potential of the Empordà DO.

Designed by RCR Arquitectes (winner of the Pritzker Architecture Prize 2017), it reflects a concept of minimal environmental impact that pays tribute to the terroir and landscape, putting emotion and experimentation at the heart of the winery.

The project is the first of its kind in Europe in terms of energy eco-efficiency and environmental design, recognised as one of the most exciting projects on the European wine scene over the past decade. The new Perelada winery is the first in Europe to earn LEED® Gold certification, the world’s highest rating for sustainable building.

• Discover the World’s Best Vineyards and Wineries at TOP25Vineyards.com.

The facilities, which involved an investment of more than €40 million, have already produced the 2020-2021 vintage and are set to open their doors to wine tourism this summer.